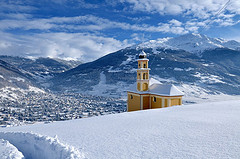 Bormio lies at the top of the Valtellina valley, a transverse valley of the Italian Alps, running east-west from Lake Como to the Ortler, and is close to the Swiss and Austrian borders.

The village sits in a sunny basin where the valleys Valdisotto, Valdidentro and Valfurva meet. Its surrounding mountains with their snow caps rise to over 3000m, and it is a beautiful setting for your holidays.

It has hosted the FIS Alpine Ski World Championships in both 1985 and 2005, and annually holds a FIS World Cup Mens Downhill race at the end of December - so is internationally known.

Bormio was first built by the Romans as a spa town and has risen to become one of the most popular resorts in Italy. At heart it is a small medieval market and spa town and its character reflects this - it has great atmosphere and charm.

Skiing in Bormio is well suited to beginner and intermediates with a great selection of runs for skiers and boarders as well as an excellent level of ski schools. More advanced skiers and boarders looking to ski Bormio will find things a bit more limited but there are some great off-piste opportunities in resort.

In winter there are 4 ski areas with a total of 160 km of pistes and 50 km of cross-country tracks, including Bormio home to the famous Stelvio World Cup piste.

The Oga-San Colombano area, a short bus ride out of Bormio, shouldnt be overlooked. Day trips to Santa Caterina (20 minutes by bus) and Livigno (around an hour) are possible. All these areas are covered by the Alta Valtellina lift pass. St Moritz is three hours away). There are also 3 snowparks for snowboarders.