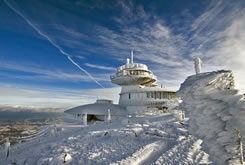 Krkonoše (in Czech; also Karkonosze in Polish, Riesengebirge in German, or the Giant Mountains) is a mountain range located in the north of the Czech Republic and the south-west of Poland, part of the Sudetes mountain system.

The Czech-Polish border, which divides the historic regions of Bohemia and Silesia, runs along the main ridge. The highest peak, Sněžka (Polish: Śnieżka), is the Czech Republic's highest point with an elevation of 1,602 metres (5,256 ft).

On both sides of the border, large areas of the mountains are designated national parks (the Krkonoše National Park in the Czech Republic and the Karkonosze National Park in Poland), and these together constitute a cross-border biosphere reserve under the UNESCO Man and the Biosphere Programme.

The River Elbe rises within the Krkonoše. The range has a number of major ski resorts, and is a popular destination for tourists engaging in downhill and cross-country skiing, hiking, cycling and other activities.

Some of the main resorts in the Giant Mountains are:

Strážné is a modern ski resort, located at 800 m above sea level, 6 km from Vrchlabí and and within easy reach of Špindlerův Mlýn. The area is equipped with four down hill tracks of all levels of difficulty from blue to black.

Other activities available include snowtubing, freestyle snowpark with lighting for evening skiing or winter horse rides.

For the lovers of ski running or skialpinism there is an ideal starting point for the ridge hike for example to the highest point of the Czech Republic - Snežka. The running tracks starting in Strážné are connected to the Giant Mountain ski track.

Pec pod Sněžkou is known not only as a starting point for the climbing route to Sněžka, the highest mountain in the Czech Republic, but also as an active alpine resort, open both in the summer and winter. Pec pod Sněžkou benefits from its geographic position and its altitute (800 - 1 602 m above sea level). Over 5 to 6 months of the year it is covered with snow. The weather conditions, similar to those near the polar circle, are often surprising to visitors of Pec pod Sněžkou. In the steep-sided valley below the Sněžka complex, services ranging from a cableway, ski lifts, hotels, lodging houses, swimming pools, discos and restaurants in the town centre and near the ski slopes all are provided.

The ski resort, which is the largest in area, has 1 four chair lift and 10 ski lifts with a transport capacity of 9 620 persons/hour and arround 11,2 km of downhill slopes of varying degrees of difficulty. The downhill slopes are particularly popular with families and children because of the wide range of choices, from nursery slopes to challenging runs.

Night skiing is available with 3 ski lifts in operation - one of which is Javor, the longest and best illuminated downhill slope in the Czech Republic.

For snowboarders, a large funpark is available season-long. Cross-country skiers (langlaufers) can make use of the Giant Mountain main track, which is kept in perfect conditions by constant grooming.