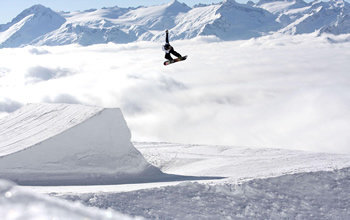 Madonna di Campiglio is an elegant ski resort located at 1550 m of altitude in a natural conch nestled between the Brenta Dolomites mountain range and the Adamello and Presanella glaciers.

Today it's one of the most important and well-known Italian ski resorts in the Alps. It's favorable position and mountain atmosphere guarantee optimal ski conditions on slopes that wind from the centre of town up to a height of 2600 meters, slopes that cater to all ability levels.

The resort boasts 57 ski lifts and 150 km of slopes, 50,000 square meters of snowpark, 40 km of cross country ski trails and, beginning in the 2011-2012 season, a direct connection to the slopes of Pinzolo (which is already connected with Folgarida and Marilleva).

As part of the Skirama Dolomiti Adamello-Brenta area there is access to 380km of downhill skiing, served by 150 ski lifts. The appropriate ski Lift Pass will allow you to ski or snowboard in the other Skirama Dolomiti Adamello-Brenta ski resorts of Andalo, Fai della Paganella, Folgaria - Lavarone - Fiorentini, Folgarida / Marilleva, Monte Bondone, Passo Tonale, Pejo, Pinzolo and Ponte di Legno. Madonna di Campiglio is directly linked by Ski Lift to the ski areas of Folgarida and Marilleva.

The ski resort itself is above 1500m, so skiing or boarding back to the resort is usually possible. With pistes above 2500 metres, skiing and snowboarding is assured throughout the season.

Madonna di Campiglio is known for it's social scene, but you don't need to go far to immerse yourself in a panorama of lakes, valleys, streams, shepherd's huts and refuges. The 50,000 hectares of the Adamello-Brenta Natural Park and the 450km of mountain trails offer breathtaking views for those who hike or bike through the shade of the indigenous larch and fir tree forests.