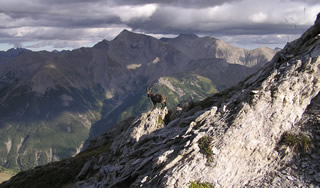 The Vallée de l'Ubaye sits in the Alps of Haute-Provence, also known as the Southern Alps, which share a small part of their eastern border with Italy.

The area's main claim to fame is its splendid, unspoilt scenery featuring craggy outcrops, larch woods and and brilliant Mediterranean sunshine so characteristic of the mountains of Provence.

The area is fashionable with French skiers, but little known, as yet, to the rest of the European market.

The main ski area is L'Espace Lumière in Val d'Allos, the greater part of which was lift linked in 1989 when Pra Loup and La Foux d'Allos joined forces. A second smaller area above Le Seignus completes the region. The area has a modern efficient lift system, with a great over capacity that normally keeps lift queues to a minimum.

The Pra Loup gondola is ideal for boarders and beginners as it goes straight up from the village at 1600m to sunny nursery slopes with nearby restaurant and stunning views. The easy green run down from the gondola is fitted with permanent snow cannons ensuring snow cover at early and late season.

Intermediates can easily get around the area on the numerous blue and red runs. Developing skiers will particularly enjoy this resort with its long open runs and lack of queues which makes it so much easier to ski non-stop and put miles under the skis.

For a change of scene La Foux d'Allos 1800 makes a good day trip for capable skiers, the quartier is a fast red down from Le Lac, with the only option a black run. Allos village is small but it does have 16 restaurants. If you take the gondola ride up to the Observatory there's the choice of a red, a long black run, or a scenic return trip on the gondola.

The off-piste is easily accessible and because the area is so huge compared to the tourist capacity theres often untracked powder which stays light and dry much longer on the north-facing slopes. Freeriders will love Pra Loup too - plenty of wide open fast runs with the occasional tricky stretch to hold your attention. Reputed to have some of the best snowmaking facilities in France, most of the runs back to the village have snow cannons which are used early season to provide a good base and then late season to keep access open.

Purpose-built in 1961 the resort was named after the previous inhabitants of this spectacular site - the mountain wolves. Pra Loup is made up of 2 villages, Molanes at 1500m (Pra Loup 1500) and Pra Loup 1600m - the larger of the two - with most of its shops, café's and bars within easy reach of the slopes.